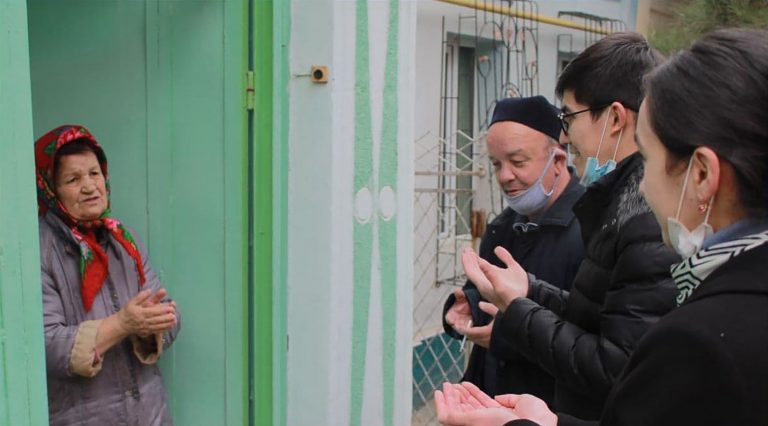 According to the research conducted in 2021, it turned out that Uzbekistan had the lowest pension age among other Central Asian states. The average pension is about 700-800 thousand Uzbek sum (66-76 dollars). Of course, it is almost unreal to survive on this amount of money. That’s why the pensioners who live only on pension cannot afford almost anything there. Everyone will agree that old age is a sensitive phase, elderly people need financial support and care to lead a healthy life without worries and anxiety.

One of the initiatives to provide this care was taken by our partner Tashkent State Pedagogical University. It is named after Nizami and is one of the popular higher education institutions training qualified pedagogical personnel in the Republic of Uzbekistan.

In December with the help of Toshkent Hokimiyat (City hall), Tashkent State Pedagogical University identified the list of elderly people who are living in poor conditions nowadays, special attention was given to those with fewer opportunities. As the list was big enough they decided to select 50 seniors who have worked for the sake of our children and people, such as teachers, doctors, or police officers. In addition, another criterion was the living address, i.e. the person should live in the same district or neighbouring district where the University is located. It was agreed to visit those people in January and February.

So when the time came, a team of volunteers in Uzbekistan together with one representative of Hokimiyat (City hall) visited 50 houses where those people lived. The conditions of living were various: some of them lived totally alone and their neighbours were sometimes looking after them, helping to buy food and clean the house, others lived with some of their family members but the overall income was hardly enough to support their living. Volunteers prepared “food packs’ ‘ consisting of items that could be kept for some period of time even without a refrigerator. Also, they had a talk with each of them about their past, work experience and the benefits they receive from the government. Unfortunately, it was revealed that despite all the social work and attention from the Khokimiyat many of those people had to go through long bureaucratic procedures to receive the governmental benefits. Whereas others just gave up or due to their poor health or disabilities could not finalize all the procedures. In addition, the benefits they receive are very low and it is hard enough to cover basic needs.

Providing seniors with good elderly care by themselves or with the help of professionals stops them from feeling isolated and depressed. You provide them with a sense of community and a social life that empowers and energises them. Tashkent State Pedagogical University has a massive network of students & international partners, which allows it to contribute to the dissemination & exploitation of the project’s results. Unfortunately, the system of social work and benefits still undergoes its development stage and we do believe that in the future the situation with the seniors will change.